You can start here for more about crafting a compelling presentation:

For more information about making your ideas stick at home and in your community, see our book: 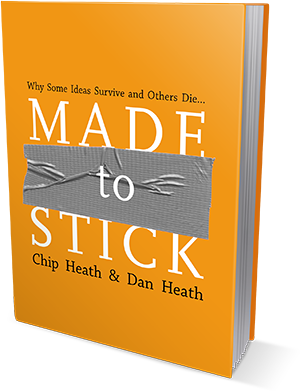 Made to Stick:
Why Some Ideas Survive and Others Die

"For anyone with good ideas who wants to capture an audience."
- Time

Since its release in 2007, Made to Stick has become popular with managers, marketers, teachers, ministers, entrepreneurs, and others who want to make their ideas stick. It's been translated into Arabic, Bulgarian, Croatian, Dutch, and 25 other languages. Made to Stick made the New York Times and Wall Street Journal bestseller lists and was retired from the BusinessWeek list after a 24-month run. It was named to several "best of the year" lists and was selected as one of the best 100 business books of all time. Want to give the first chapter a read?

If you enjoy Making Presentations Stick, check out the other resources we’ve created. All of these are free — along with a free subscription to the Heath Brothers newsletter — when you register.